Stem Cells from the Edge of Space 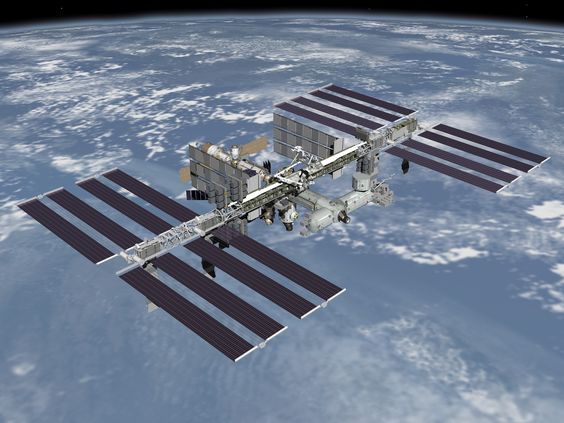 Stem cells have been lauded for their potential to cure a large array of cell based conditions, from muscular dystrophy to cancer to Parkinson’s Disease. But they have another, lesser known use: as tools for research into how human cells respond to an almost limitless variety of conditions. One of those conditions is microgravity—the virtually zero-gravity conditions of space, as experienced in the International Space Station (ISS).

It’s well known that life in space takes a toll on astronauts’ bodies. Astronauts fight cardiovascular problems, bone loss and muscle deterioration with daily exercises. Without the filtering effects of a planetary atmosphere, radiation from the sun is much higher in space, posing the risk of cellular DNA damage and harmful mutations that can lead to cancer. It’s even thought that life in space accelerates the aging process. But microgravity also provides opportunities to explore numerous issues in biology and a chance to elucidate, by contrast, the unique effects of gravity on living cells.

“Although it’s too early to tell, labs in orbit may prove to be an advantageous setting for growing complex tissues from stem cells for use in earth-bound patients.”

The ISS is a well-equipped microbiology laboratory circling the earth at 17,000 miles per hour at the edge of space. Aside from providing exhilarating views of the earth and the solar system, it provides unique conditions for studying the human body and living cells in culture. Cells behave differently in conditions of freefall, and in microgravity, the ever-present effect is one of freefall. 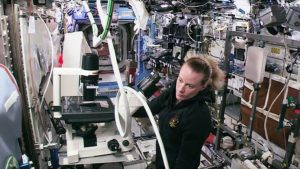 This leads to special challenges as astronaut-researchers seek to conduct cell-culturing experiments on the International Space Station U.S. National Laboratory, which is managed by the Center for the Advancement of Science in Space (CASIS) . When setting up cell cultures, nutrients, rather than collecting at the bottom of a dish, can go everywhere. Cell interactions take place without the normal fluid dynamics we’re accustomed to on earth. Fluids form floating spheres and cells are not pushed down on the plate, as they would be under conditions of gravity. As challenging as this sounds, microgravity could actually be an advantage for tissue engineering as cells are more inclined to develop into three-dimensional structures. Although it’s too early to tell, labs in orbit may prove to be an advantageous setting for growing complex tissues from stem cells for use in earth-bound patients.

The ISS is a highly controlled micro biodome for many research studies. Among them is the study of three lines of cardiomyocytes, or heart cells, culled from the induced pluripotent stem cells (iPCS) of three individuals. After being cultured for one month aboard the ISS, the cells are being returned to earth for analysis of cellular and molecular changes such as DNA mutations. Learning how microgravity affects living heart cells could shed light on the cardiac health of astronauts in space as well as humans on earth. By contrast to similar studies being conducted on earth, this work may even reveal how gravity can be used as a tool in microbiology.

The heart cell studies on the ISS could yield valuable benefits for treating heart disease, which is the number one killer of both men and women. Over a lifetime, aging and heart disease lead to the death of cardiac cells, and these cells in general don’t replace themselves. Pluripotent stem cells, though, can be induced to differentiate into the vital cardiac cells that can rebuild damaged heart tissue, possibly putting an end to heart failure, the end-stage of advanced heart disease. The cardiomyocytes being studied on the ISS are the living, beating heart cells that are essential to the healthy functioning of a beating heart.

In the future, these studies will no doubt contribute to the science of sending astronauts on long space flights and, if colonizing other planets is in our path as a civilization, may even help our progeny learn to live long-term on a neighboring planet. While stem cells are now in their first foray into space, when it comes to the possible implications for disease treatment here on earth, the ISS provides unprecedented opportunities to regenerate living heart tissue. If scientists can do that, millions of people worldwide will be in debt to the international effort to grow cells in space.

Eve Herold is an author and a science writer specializing in issues at the intersection of science and society. A former Managing Editor of The Gerontologist, and a leader in notable medical organizations, Eve is the author of Stem Cell Wars: Inside Stories from the Frontlines. Her latest book, Beyond Human, has been nominated for the 2016 Kirkus Prize in Nonfiction.