On December 2016, Mayor Bill De Blasio announced that the city’s next great industry is biotechnology. A lofty goal grounded in reality and backed with a $500 million funding commitment.

Not long after this announcement, in April 2017, I visited New York to witness the opening of the New York Stem Cell Foundation (NYSCF) laboratories, one of the largest laboratories in the world devoted exclusively to stem cell research.

During my visit, I stayed at the storied behemoth New Yorker hotel near Madison Square Garden. Its deco style lobby and original bronze elevator doors are artifacts form the Big Band era that included Benny Goodman and Guy Lombardo’s New Year’s Eve celebrations. But the hotel has a special attraction to science geeks (such as myself) who are drawn to room 3327, where undoubtedly resides the ghost of Nicola Tesla, who lived there the last decade of his genius life as a reclusive and passionate pigeon-lover. The room has a memorial plaque and in the basement there is a display case of interesting Tesla memorabilia. After Tesla died, the Feds supposedly swooped into his room and confiscated all of his notes on building “death rays”- and to this day, we are perhaps lucky that those secrets remain hidden. 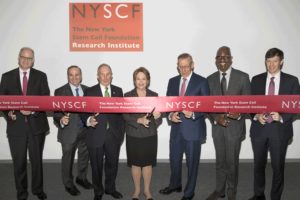 Walking over to the NYSCF laboratory on the chilly morning, I passed through New York’s grandest Mercedes Benz dealership. Partaking of the complimentary coffee and fruit, I examined the grand collection of cars, any one of which I think might make a billionaire blush.

And speaking of billionaires, the ribbon cutting at NYSCF had its fair share in attendance, as well as dignitaries from science, the arts, media and supporters. It seemed all of Manhattan’s hoi polloi were there!

“The impressive 40,000 square foot Research Institute stands among the largest laboratories in the world devoted exclusively to stem cell research.”

The event marked another milestone for the foundation under the leadership of NYSCF co-founder and CEO Susan Solomon. Susan is the principal visionary guiding a foundation from inception with zero dollars and growing it into a formidable institution funding more than $150 million for disease-focused research including mitochondria replacement therapies and now launching a grand state-of–art laboratory.

One of the stars of the ribbon cutting was the 108th Mayor of New York City Michael Bloomberg (or as Susan calls him “Mike”). As private philanthropist, the former Mayor and business media mogul has given huge sums to support stem cell research. “Mike” smiled, winked at Susan and said fondly “crazy people do a lot of great things!”

Another ribbon-cutter was NYSCF board member, real estate magnate Steve Ross who is the builder of Hudson Yards and owner of the NFL Miami Dolphins. His theme, when Susan asks for a donation, “you can’t say ‘no’.”

The impressive 40,000 square foot Research Institute is one of the largest labs in the world focused exclusively on stem cell research. Tours were provided to us by lab-coated scientists. We looked into the gleaming laboratories showcased behind floor to ceiling glass partitions. Inside the researchers are manufacturing custom-designed iPS cell lines. I was awestruck by the magnitude of the whole enterprise that includes automated robotic technology, specialized GMP laboratory facilities for manufacturing cells for therapies with additional laboratories including molecular biology, imaging, cell sorting, and electrophysiology suites. Wow!
The NYSCF is but a single jewel among a collection of renowned institutions based in the city, all making advances in the field.

“undisputedly, the Big Apple has become one the greatest hubs for stem cell research in the world”

While at the reception I had a conversation with Dr. Thomas Zwaka, who also serves as a member of the Regenerative Medicine Foundation Science Advisory Board. Thomas is the head of the Black Family Stem Cell Institute that serves as the central node for the many studies on stem cell biology and regenerative medicine taking place across the Icahn School of Medicine at Mount Sinai. Researchers there recently identified precursors to blood stem cells or hematopoietic stem/progenitor cells (HSPCs).

The city also hosts the Tri-Institutional Stem Cell Initiative combining some of the top researchers of Rockefeller University, Memorial Sloan-Kettering Cancer Center and Weill Cornell Medical College. I was pleased to meet in-person Weill Cornell’s Dr. Shahin Rafii who shared with me some details regarding his lab’s own breakthrough research on HSC’s published in Nature.

Contrasting his research as an alternative to utilizing iPSC’s for the same purpose, Shahin Rafii compares his approach to a direct airplane flight as opposed to a flight that takes a detour to the moon before reaching its final destination. Given the enormous resources being poured into iPSC research and related commercial enterprises, the implications of Dr. Rafii’s comments are profound, serving as a challenge to those using reprogrammed cells for therapeutic purposes. It’s all up for grabs!

After experiencing first hand the momentum, critical mass of research, and potential funding converging on New York City I have no question that the Big Apple has become one the greatest hubs for stem cell research in the world.

Bernard Siegel is the Founder and Executive director of the Regenerative Medicine Foundation and the World Stem Cell Summit. As a recognized policy expert on stem cell research, regenerative medicine and cloning, Mr. Siegel is a frequent panelist and keynote speaker on the subject of stem cells, public policy, patient advocacy and the societal implications of longevity. He has spoken at the United Nations, the Salk Institute, the German National Academy of Science (The Leopoldina), and others. He has lectured at more than 40 colleges and universities around the globe.