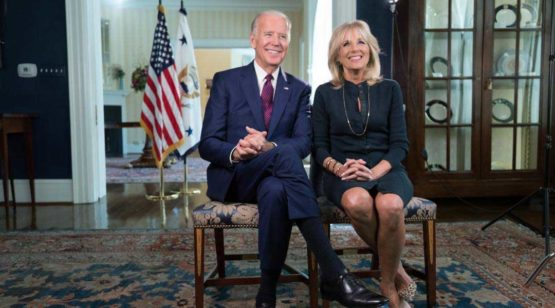 MIAMI – January 25, 2018 –  Greg Simon, president of the Biden Cancer Initiative gives an acceptance speech on behalf of the Bidens.

Former Vice President Joe Biden and Dr. Jill Biden were among several leaders, innovators and professionals in the regenerative medicine field honored during an award dinner Wednesday evening as part of the 13th World Stem Cell Summit in Downtown Miami.

The Bidens were given the Advocacy Award at the gala, held at the James L. Knight Center, for their cancer research and prevention work through the Biden Cancer Initiative.

The couple founded the initiative to follow up on the success of the Beau Biden Cancer Moonshot, which the vice president launched following his son’s death from brain cancer in 2015.

In December 2016, momentum from the Cancer Moonshot aided the passing of the 21st Century Cures Act, which will allocate $1.8 billion over seven years to work conducted through the Biden Cancer Initiative.

“The one thing that everyone has in common all around the world is this fear of cancer,” Biden said during a prerecorded acceptance video. “As a consequence of it, I’ve been able to have a great advantage of being exposed to the greatest minds in the world dealing with the fight against cancer. We are right at the cusp of making some real dramatic changes.”

Greg Simon, president and director of the Biden Cancer Initiative, accepted the award on the couple’s behalf. During his speech, he shared the story of his best friend, Bart, who passed away from multiple myeloma and sacrificed the last weeks of his life for clinical research.

Norio Nakatsuji, founder of Nakatsuji Foresight Foundation and director of the Institute for Integrated Cell-Material Sciences at Kyoto University in Japan, won the International Leadership award for his work with various stem cells, including pluripotent stem cells — so called “master stem cells” — that can be generated from adults.

After receiving his award, Nakatsuji expressed eagerness in continuing the growth of regenerative medicine.

“[The] award is not only for my scientific activity, but my activity [for] putting the many sectors together for the common purpose of finding a cure for disease,” he said.

The ceremony also honored Shelly Ross, president of the Cure Alliance, a nonprofit international group of scientists, researchers and doctors developing cures for chronic, debilitating and fatal disease. Ross, an Emmy and Peabody award-winning television producer, spoke in detail about the regenerative treatment she received in Italy after surviving breast cancer.

“The only way to heal when you have no breast tissue or reconstruction is that your skin scars to your ribcage,” she said. “I had the best resources and all of the doctors said that this is it. So I went to Milan and it was a simple fat transplant. It broke down the scarring in the chest cavity and repaired the tear that it caused.”

The experience, she said, inspired her to become the spokeswoman and eventual president of the Cure Alliance.

“I rejected other reconstruction properties but my own fat – there is zero chance of rejection,” said Ross. “When that worked, I realized that I need to advocate on behalf of regenerative medicine.”

The summit runs Jan. 22-26 and is estimated to draw close to 500 attendees, more than 200 organizations and more than 100 speakers from 30 different countries. Topics include ethics and policy workshops, as well as discussions of studies done with regenerative medicine, patient advocacy stories and clinical trials.