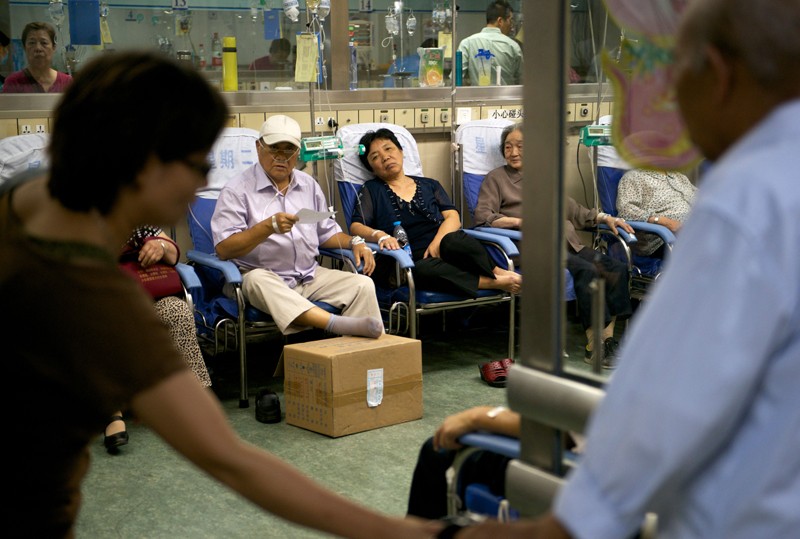 Under a draft proposal, patients would be able to buy some therapies without regulatory approval.

Select elite hospitals in China could soon be able to sell experimental therapies that engineer a patient’s own cells to treat diseases such as cancer — without approval from the nation’s drug regulator. The proposal comes three years after the government shut down the sale of unapproved cell therapies following the death of a student who had received such a treatment.

The draft policy has prompted mixed responses. Some scientists say that it would give people with terminal illnesses faster access to potentially effective treatments, and that the measures would protect patients from dangerous therapies. But others question whether the regulations do enough to ensure that the treatments are safe and effective before they are sold.

In many countries, the use of cell therapies — treatments made from human cells, often from the immune system — requires approval from drug regulators, which means rigorous, costly and time-consuming clinical trials to show that they are safe and effective. Some countries have policies, such as Australia’s Special Access Scheme, that allow doctors to administer unapproved cell therapies under special conditions, such as a patient being terminally ill.

But those are determined on a case-by-case basis, are rarely used and are offered at no cost to the patient, says Rajiv Khanna, a cancer immunologist at QIMR Berghofer Medical Research Institute in Brisbane, Australia. “I am not aware of any regulatory system where top hospitals can offer cellular therapies for commercial gain on their own discretion,” he says.

Under China’s draft policy, which the health ministry released in March, select hospitals would be allowed to sell these therapies without testing them in large numbers of people. The proposal is expected to come into effect within the next few months.

“The regulation will promote innovation and industry in cell therapy, which will eventually benefit patients,” says cancer immunologist Ma Jie, the director of the biotherapy centre Beijing Hospital.

Bruce Levine, a cancer researcher at the University of Pennsylvania in Philadelphia, says the proposed regulations are a step in the right direction, but he questions whether these select hospitals are prepared for the potential dangers of cell therapies.

One type of cell therapy that has drawn a lot of attention lately is immunotherapy, in which immune cells are engineered, often to target cancerous cells that otherwise evade the body’s defence system. These can be made from recipients’ own cells or from donor cells, and have helped some people to make surprising recoveries.

But the excitement around these cancer immunotherapies — two researchers won a Nobel prize last year for pioneering them — has been tempered after several participants in US clinical trials died from side effects. Regulators around the world have moved slowly to approve the treatments for sale. There are hundreds of clinical trials in progress, but the US Food and Drug Administration has approved only three such immunotherapies so far, and the Chinese drug regulator has approved none.

Before 2016, Chinese regulations for the sale of cell therapies were ambiguous, and many hospitals, especially military hospitals, sold the treatments to patients while safety and efficacy testing was still under way. Chinese doctors contacted by Nature, such as Ren Jun, an oncologist the Beijing Shijitan Hospital Cancer Center, estimate that roughly one million people paid for such procedures, making China one of the world’s largest markets for cancer immunotherapies.

But the market came under scrutiny when it was revealed that a university student with a rare cancer had paid more than 200,000 yuan (US$30,000) for an experimental immunotherapy, after seeing it promoted by a hospital on the internet. The treatment was unsuccessful, and the student later died. The government subsequently cracked down on hospitals selling cell therapies — although clinical trials in which participants do not pay for treatments were allowed to continue.

Prohibiting the sale of untested cell therapies was a good idea, says Ren. Hundreds of hospitals were offering these therapies without sufficient training in how to process or prepare cells, or adequate research to make sure that they worked, he says. “They would just open facilities and start taking blood from patients.”

But since the ban, hospitals have found it difficult to recruit participants for clinical trials, says Ren. New, clearer rules are necessary to encourage safe development of therapies, he says.

Under the proposed regulations, roughly 1,400 elite hospitals that provide specialist care and conduct medical research, known as Grade 3A hospitals, would be able to apply for a licence to sell cell therapies, after proving that they have expertise in processing the cells and running clinical trials.

Once the hospital was licensed, its review board would oversee clinical research of experimental therapies, with participants who did not pay. If the board were to decide that these investigations had produced enough evidence that a therapy was safe and effective, the hospital would be able to start selling it. Hospitals and companies without the special licence would still need the China Food and Drug Administration to approve their therapies, and would still require large-scale, controlled clinical trials.

Ren says the proposed measures are a practical way to control the quality of experimental therapies. He is confident that they would prevent treatments of unknown quality being promoted and sold, as happened before 2016. “They will make sure the facility, staff and equipment are good enough,” he says.

Not everyone agrees. “The proposed regulation is a bad idea,” says Michele Teng, who studies cancer immunotherapy at QIMR Berghofer. “It is critical that any new cellular therapy to be administered into patients demonstrates its safety and efficacy in phase III efficacy trials.”

The regulations suggest that having large, well-funded facilities and trained medical staff is enough to allow these treatments to be sold, says Douglas Sipp, who studies cell therapy policies at the RIKEN Center for Biosystems Dynamics Research in Kobe. But those things are not an adequate substitute for well-designed studies to determine whether a treatment is efficacious or not, he says.

The rules could also dissuade pharmaceutical companies from doing rigorous studies, he says: companies will have no incentive to conduct well-designed studies if they are forced to compete with hospitals that have “carte blanche to offer therapies of every kind”.

But Ren says that companies will work with hospitals to test their treatments, and that the therapies’ effectiveness will be measured using a combination of objective criteria — such as whether tumours have shrunk — and patient-reported outcomes.

Wang Yuedan, an immunologist at Peking University in Beijing, says the draft regulations give him confidence to resume planning clinical studies. He stopped clinical work on cellular immunotherapies more than a decade ago, because the lack of regulations meant that there was no way to tell which therapies worked and which did not.

But he still worries about the shortage of doctors with clinical-trial experience. Hospitals without enough qualified experts might ignore the regulations, or hospital review boards might mistakenly approve immunotherapies that aren’t safe for patients. “It could return to the previous state,” he says.