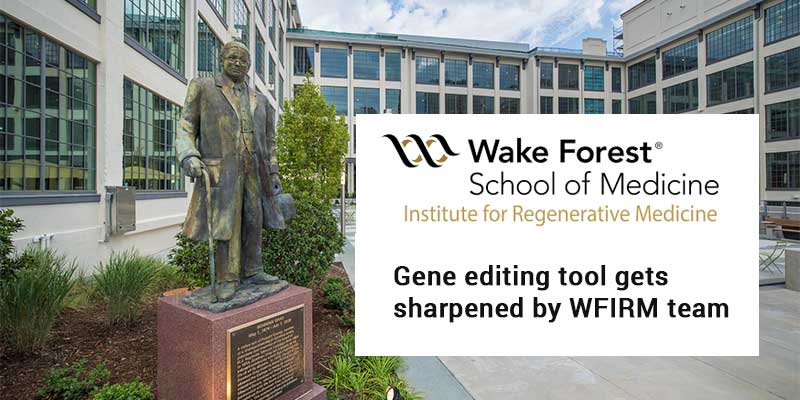 “With this new method we are able to package together in one lentiviral capsid both essential components (Cas9 protein and guide RNA) for the CRISPR mediated gene editing,” said Baisong Lu, Ph.D, assistant professor of regenerative medicine at WFIRM and one of the lead authors of the paper. “Previously, the two components had to be delivered separately which was not as convenient.”

CRISPR (clustered regularly interspaced short palindromic repeats) technology is used to alter DNA sequences and modify gene function. CRISPR/Cas9 is an enzyme that is used like a pair of scissors to cut two strands of DNA at a specific location to add, remove or repair bits of DNA. But CRISPR/Cas9 is not 100 percent accurate and could potentially cut unexpected locations, causing unwanted results.

Now the WFIRM team can package the two components — Cas9 protein (the enzyme) and the guide RNA–as ribonucleoproteins inside the lentiviral capsid, creating a lentiviral capsid-based bionanoparticle system for delivering CRISPR/Cas9. Lentiviral vector is a widely used gene delivery vehicle in research labs and is already widely used for delivering the CRISPR/Cas9 machinery for efficient genome editing. However, using lentiviral vector to deliver CRISPR/Cas9 will result in long-term expression of the endonuclease, which is undesired for safety reasons. The new system offers the delivery efficiency of conventional lentiviral vectors, but enables transient Cas9 expression. Thus, the new CRISPR/Cas9 delivery system is more efficient and safer.

The research has led the team to hypothesize that a “similar strategy should be translatable to other editor proteins for gene disruption,” said Anthony Atala, M.D., director of WFIRM and a co-author of the paper. “We may be able to utilize this to package and deliver other RNPs into mammalian cells, which has been difficult to achieve so far.”

The research is part of an ongoing effort to improve in vivo gene editing efficiency which will be useful in research and clinical applications by improving safety and avoiding possible immune responses.

Co-authors Lu and Atala are inventors on patent rights related to this work owned by Wake Forest University Health Sciences. The patents, whose value may be affected by publication, have the potential to generate royalty income in which the inventors would share.