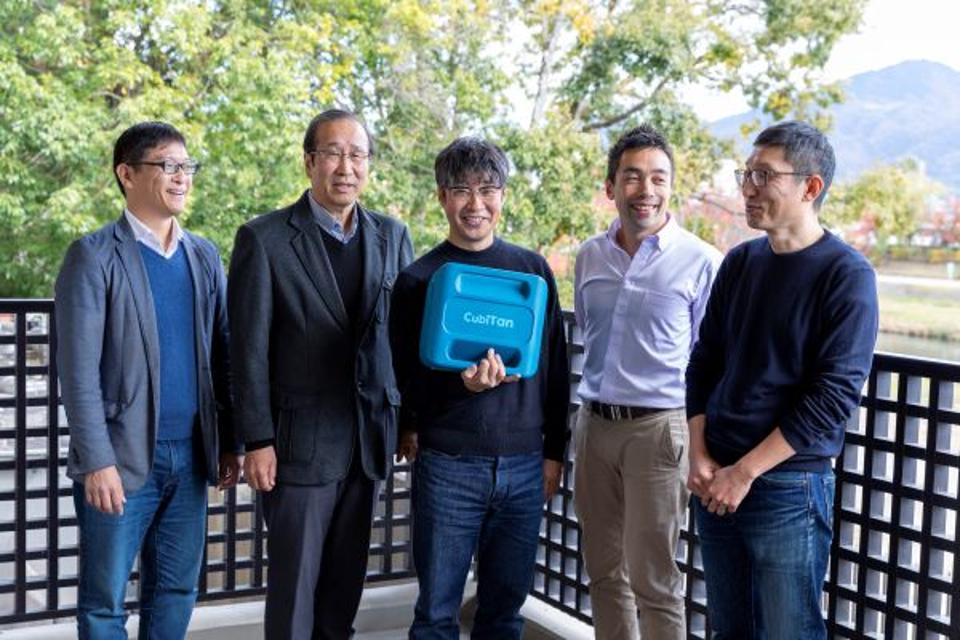 As humans continue to pump more and more carbon dioxide into the atmosphere, concerns about global warming and climate change continue to grow. But what if that CO2 could be turned into a source of energy? One startup in Kyoto has developed cutting-edge nano-materials that could trap atmospheric CO2 and harness it as a power source. It’s one way that Japan’s ancient capital is harnessing its large scientific and biomedical potential to address environmental and social problems.

Atomis is a new materials company that was spun off from Kyoto University Institute for Integrated Cell-Material Sciences (iCeMS). Founded in 2015 following government-supported research, its business is based on studies led by Susumu Kitagawa, a professor and the director of iCeMS.

Its core technology is the production of materials comprising extremely small void spaces that can trap gases, including CO2. A breakthrough discovery in 1997 by Kitagawa, who has been considered a contender for the Nobel Prize in Chemistry, these porous coordination polymers (PCPs, aka metal-organic frameworks) have enormous potential as tools to precisely control gases.

Humans have used the principle behind PCPs for thousands of years. They work the same way that a hunk of charcoal traps ambient odor molecules in its large surface area, but PCPs are many times more powerful. To the naked eye, PCPs look like powders, pellets or granules of various colors, shapes and sizes. But if you were to zoom in, you would see that PCPs are sponge-like materials with pores the size of a nanometer, or one billionth of a meter. They can be designed as scaffoldlike 3D structures from metals and organic ligands, and can be used for storage, separation and conversion of molecules.

“These materials are unique in that we can design the shapes and chemical properties of the pores to suit specific applications, and some of the materials have flexible structures, which can potentially provide them with even more advanced features,” says Daisuke Asari, president and CEO of Atomis. The company is basically the only business in Japan working with these materials in an industrial context. Collaborating with Kitagawa is a big advantage over foreign rivals, adds Kenji Sumida, executive officer for R&D.

One challenge related to these nanomaterials is that it’s difficult and costly to produce more than a few kilograms per day. Massively scaling production so that PCPs can be used to fight climate change is one reason that Atomis was founded, says Atomis founder and CTO Masakazu Higuchi, one of Kitagawa’s collaborators. The firm is developing solid-state techniques and making capital investments to increase PCP production capacity. Meanwhile, Atomis has developed products that harness the groundbreaking potential of PCPs, including Cubitan®, a compact and lightweight gas cylinder for industrial and consumer use packed with smart features, such as the ability to notify users when the amount of reserve gas becomes low.

Kitagawa has his sights on the bigger picture. He believes PCPs can be used as a form of carbon-capture technology, allowing the synthesis of methanol, an energy source. That’s why he calls CO2 “invisible gold.”

“In ancient China, Taoist mystics were said to live in the mountains and survive simply on mist, which consists of water, oxygen and CO2,” says Kitagawa. “They were taking something valueless and using it for energy. Similarly, PCPs can control gases that humans cannot use and turn them into something beneficial, for instance absorbing CO2 in the air and turning into methanol and other hydrocarbon materials.”

Atomis is one of many science startups in Kyoto that have benefitted from collaborative research between industry and government. It’s part of a growing startup industry in Japan, where total funding for new companies reached a record high of 388 billion yen in 2018, up from 64.5 billion yen in 2012, according to Japan Venture Research. One driver for this expansion is science and technology discoveries.

While it may be known for its traditional culture, Kyoto has a strong pedigree in scientific research. It is home to 38 universities and about 150,000 students, which form a large pool of institutional knowledge, experience and talent. Many recent Nobel laureates either graduated from or taught at Kyoto University, including professors Tasuku Honjo and Shinya Yamanaka, who won the Nobel Prize for Physiology or Medicine in 2018 and 2012, respectively. Working on discoveries by Yamanaka, Megakaryon has become a world leader in creating artificial blood platelets made from synthetic stem cells. There’s also a large group of high-tech companies that have carved out niches for themselves internationally.

“Kyoto companies like Murata Manufacturing, Horiba, Shimadzu, and Kyocera have a global market and they’re competing with China,” says Eiichi Yamaguchi, a professor at Kyoto University who has founded four companies. “That’s the difference with companies in Tokyo, which are more domestically oriented.”

Yamaguchi has authored several books on innovation, and says there is a growing awareness of the importance of collaborative research and entrepreneurship in Kyoto. He cites a recently formed cooperative group of seven university chairpersons and presidents from leading materials and biosciences companies that meets to discuss issues such as fostering new technologies, for instance building high-speed hydrogen fueling systems.

“Kyoto is a unique city in that it has an independent spirit that is similar to the U.S. West Coast,” says Yamaguchi. “Kyoto is only a fraction of the size of Tokyo, but if you take a stand here, people will pay attention.”

Another group that is promoting local high-tech business is Innovation Hub Kyoto. It’s an open innovation facility based in the Kyoto University Graduate School of Medicine aimed at commercializing research from the university. Steps away from Kyoto’s historic Kamo River, it’s geared to researchers, investors, startups, and established companies working in the field of medical innovation including device development and drug discovery. This is where Japanese researchers are trying to build a Silicon Valley of regenerative medicine.

Part of the Kyoto University Medical Science and Business Liaison Organization, the hub was established about 15 years ago and opened a new building in 2017 with the support of the Ministry of Education, Culture, Sports, Science and Technology. The structure has a variety of labs, including ones meeting biosafety level P2 and for animal experiments.

“It’s tough for startups in Japan to access to animal laboratories like the one we have,” says hub leader Yutaka Teranishi, a professor in the Graduate School of Medicine who estimates that some 50% of university researchers want to work with industry, up from 10% a few years ago. “We’re focused on university startups because it’s very difficult for them to develop drugs from just an alliance between companies and universities.”

About 28 companies are tenants at Innovation Hub Kyoto. They include major brands such as Shimadzu and Nippon Boehringer Ingelheim as well as younger businesses. One is AFI, founded in 2013 and focused on fluid, electric filtering and sorting (FES) technology that can be used for applications ranging from food safety inspections to rapid diagnosis of disease to regenerative medicine.

Another tenant is CELLINK, a Swedish bioprinting and bioink company headed in the Japan by Tomoko Bylund. Using its products, researchers can print body parts with human cells for drug and cosmetics testing. In 2019, the first 3D print of a human cornea in the U.S. was accomplished with the company’s BIO X Bioprinter.

iHeart Japan is also a tenant. It was established in 2013 as a regenerative medicine business and is aiming to address a major shortage in the Japanese medical system: only about 40 out of 200,000 people on national waiting lists can receive donor hearts every year. The company is developing innovative medical products such as multi-layered cardiac cell sheets derived from synthetic stem cells. The Hub basis its success in fostering companies on its diversity and the business environment in Kyoto.

“We have people from different backgrounds here who are exchanging cultures and experimental results, and this diversity is powering innovation here,” says Teranishi. “There are many traditional industries in Kyoto, and though people say it’s a conservative city, these companies have survived because they’re open to new technologies and have taken the time to choose which ones can help them. That’s how this city and its businesses have lasted for more than 1,000 years.”