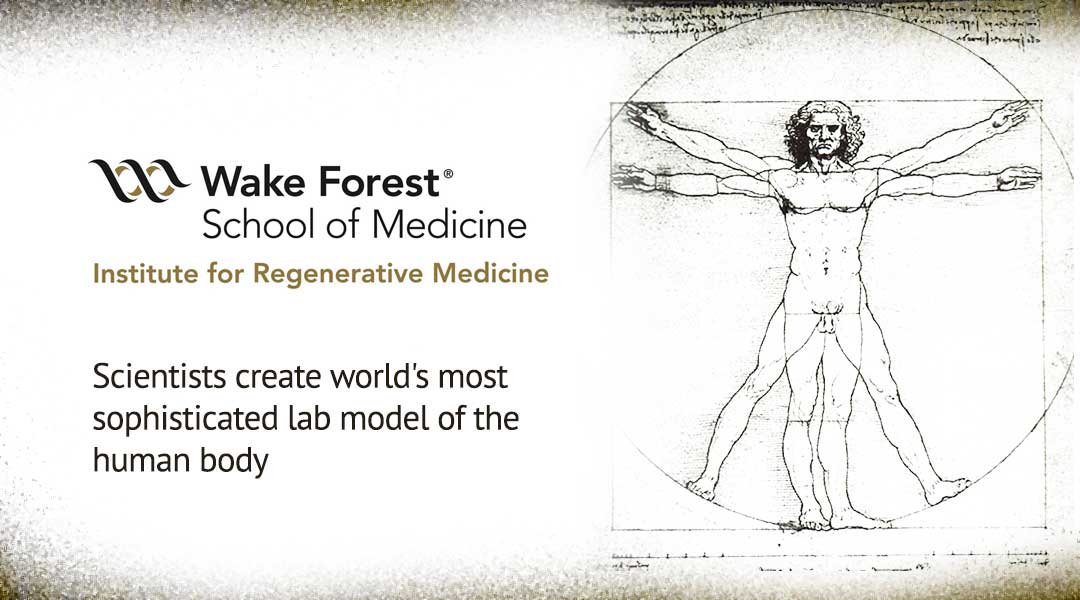 WINSTON-SALEM, NC – March 2, 2020 – Scientists at the Wake Forest Institute for Regenerative Medicine (WFIRM) have developed the world’s most sophisticated laboratory model of the human body, creating a system of miniaturized organs that can be used to detect harmful and adverse effects of drugs before they are prescribed to patients. Using such a system in screening potential pharmaceuticals could have a significant impact on speeding new drugs to market, lowering the cost of clinical trials, and reducing or eliminating animal testing.

The system, developed from funding provided by the Defense Threat Reduction Agency (DTRA), is built from many human cell types that are combined into human tissues representing a majority of the organs in the human body such as the heart, liver and lungs. Each of these miniature organs are tiny 3D tissue-like structures about one millionth the size of an adult human organ. The system can be used to mimic tissues/organs and can be used as a testing and predicting platform.

“The most important capability of the human organ tissue system is the ability to determine whether or not a drug is toxic to humans very early in development, and its potential use in personalized medicine,” said Anthony Atala, MD, of the Wake Forest Institute for Regenerative Medicine and the study’s senior author. “Weeding out problematic drugs early in the development or therapy process can literally save billions of dollars and potentially save lives.”

In fact, WFIRM’s miniature organ model has already been able to measure toxicity in many drugs approved for human use that were later pulled from the market when it was discovered that these drugs could actually be quite harmful to people. Although toxicity from the recalled drugs was not found initially using standard 2D cell culture systems and animal testing models, and adverse effects were not detected throughout three levels of human clinical trials, the system developed at WFIRM was able to readily detect toxicity, replicating the damage seen in humans.

In a paper published by the journal Biofabrication, the researchers detail how the miniature organs were created and how the human organ tissue system works. Because of the specified individual requirements of each type of tissue, a toolbox of biofabrication techniques was employed to create each miniaturized organ.

Tiny samples of human tissue cells are isolated and engineered into miniature versions of the human organ. They can contain blood vessel cells, immune system cells, and even fibroblasts, the cells in the connective tissue. Each of these organs, also known as organ tissue equivalents, performs the same functions that they do in the human body. For example, the heart beats about 60 times each minute, the lung breaths the air from the surrounding environment, and the liver breaks down toxic compounds into harmless waste products.

Another hallmark feature of WFIRM’s human organ tissue system is the blood circulatory system. Each system contains media, a substance containing nutrients and oxygen, that is circulated among all the organ types, delivering oxygen and removing waste. The blood system in these devices is very small, employing a technology known as microfluidics to recirculate test compounds through the organ system and remove the drug breakdown products that each organ is producing.

The WFIRM team recognized very early on that drugs and toxic molecules don’t move neatly from one organ to the next. Rather than transfer samples from one organ type to the next, the researchers built a microfluidic circuit that recirculates samples, over and over, through each organ in exactly the same way that the heart recirculates molecules through the human body in the blood.

WFIRM’s human organ tissue system was not easy to develop. The institute scientists have been working for close to three decades to build large-scale human organs for transplantation into patients. To date, more than 15 tissue and organ products/technologies developed by WFIRM scientists, including muscle, bladder and vaginal organs, have already been tested in humans in clinical trials.

“Creating microscopic human organs for drug testing was a logical extension of the work we have accomplished in building human-scale organs,” said co-author Thomas Shupe, PhD, of WFIRM. “Many of the same technologies we have developed at the human-scale level, like including a very natural environment for the cells to live in, also produced excellent results when brought down to the microscopic level.”

Because the WFIRM system contains the right cells, in the right numbers from the right species, the data is much more predictive of biological responses expected in normal human beings.

Authors Skardal, Shupe, Soker, Murphy, Bishop and Atala are inventors on patent rights related to this work owned by Wake Forest University Health Sciences. The patents, whose value may be affected by publication, have the potential to generate royalty income in which the inventors would share.

About the Wake Forest Institute for Regenerative Medicine: The Wake Forest Institute for Regenerative Medicine is recognized as an international leader in translating scientific discovery into clinical therapies, with many world firsts, including the development and implantation of the first engineered organ in a patient. Over 400 people at the institute, the largest in the world, work on more than 40 different tissues and organs. A number of the basic principles of tissue engineering and regenerative medicine were first developed at the institute. WFIRM researchers have successfully engineered replacement tissues and organs in all four categories – flat structures, tubular tissues, hollow organs and solid organs – and 15 different applications of cell/tissue therapy technologies, such as skin, urethras, cartilage, bladders, muscle, kidney, and vaginal organs, have been successfully used in human patients. The institute, which is part of Wake Forest School of Medicine, is located in the Innovation Quarter in downtown Winston-Salem, NC, and is driven by the urgent needs of patients. The institute is making a global difference in regenerative medicine through collaborations with over 400 entities and institutions worldwide, through its government, academic and industry partnerships, its start-up entities, and through major initiatives in breakthrough technologies, such as tissue engineering, cell therapies, diagnostics, drug discovery, biomanufacturing, nanotechnology, gene editing and 3D printing.