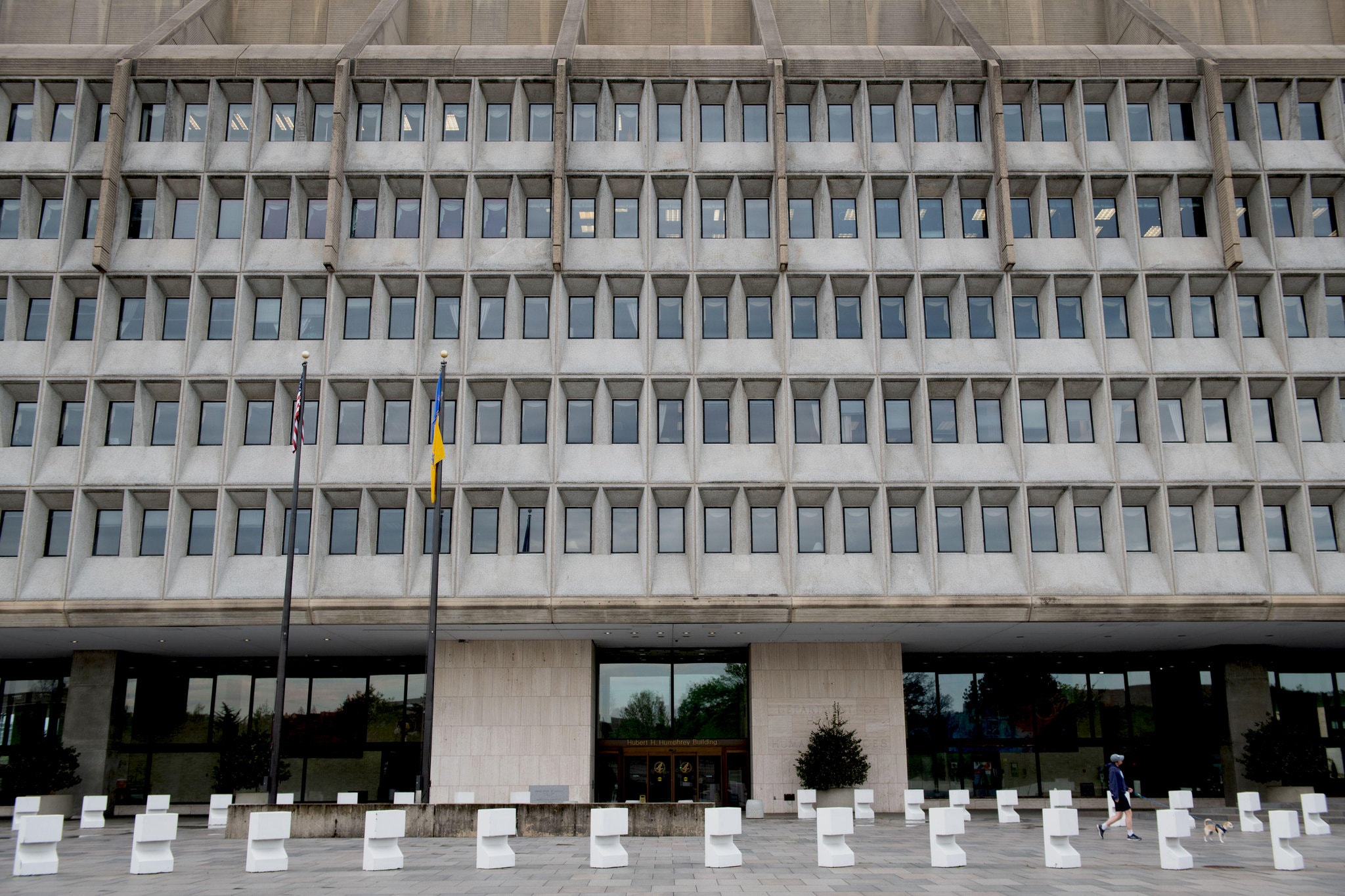 The shift, quietly disclosed on a government website, highlights how the Trump administration is favoring development of vaccines over treatments for the sickest patients.

When the coronavirus kills, it attacks the lungs, filling them with fluid and robbing the body of oxygen. In chest X-rays, clear lungs turn white, a sign of how dangerously sick patients are.

But earlier this month, the Biomedical Advanced Research and Development Authority, or BARDA, a federal health agency, abruptly notified companies and researchers that it was halting funding for treatments for this severe form of Covid-19, the disease caused by the virus.

The new policy highlights how staunchly the Trump administration has placed its bet on vaccines as the way to return American society and the economy to normal in a presidential election year. BARDA has pledged more than $2.2 billion in deals with five vaccine manufacturers for the coronavirus, compared with about $359 million toward potential Covid-19 treatments.

But the shift in strategy also shows that the administration is backing away from the relatively modest funding it has provided so far for treatments that address the severe lung ailments, while continuing support for antiviral therapies that could treat people earlier in the course of the disease.

The decision to suspend investment in lung treatments blindsided academic researchers and executives at small biotech companies, who said they spent months pitching their proposals to BARDA, which is a division of the Department of Health and Human Services.

Some clinicians and bioethicists contend that BARDA should continue supporting research into treatments for lung conditions, while other experts contend the policy is a sensible way to spend limited federal dollars.

Vaccines are universally considered the world’s best hope for stopping the virus, but scientists and doctors treating patients hospitalized with Covid-19 caution that there is no guarantee a vaccine will be ready by the end of the year, as President Trump has promised. And no treatment or therapy has been proved to prevent the disease.

Most of the patients admitted to the intensive care unit for Covid-19 at Northwell Health in New York, a system of 23 hospitals at the epicenter of the region’s epidemic this spring, have developed severe respiratory distress, said Dr. Mangala Narasimhan, the regional director of critical care medicine at Northwell.

“You’re going to need other forms of treatments for a lot of those people, and I feel like that’s where there’s going to be a gaping hole,” she said.

Even if a vaccine is approved, she and others noted, people will still get sick from the virus because not everyone will get vaccinated, or the effectiveness of a vaccine may wane in months, or it may not work in older people or those with compromised immune systems. Thousands of people die from the flu in the United States each year even though there is a vaccine and treatments for that virus.

“Everybody deserves some piece of the pie,” said Dr. Arthur L. Caplan, a bioethicist at NYU Langone Medical Center. “It’s public money, so you do have to pay attention to the needs of all.”

But other experts said that BARDA’s shift away from lung treatments made sense, given that vaccines or broad-based antiviral drugs would do the most to stop the global spread of the virus, and experimental treatments like stem-cell therapies are far from proved.

“It’s not unreasonable, what they are doing,” said Dr. Luciana Borio, who oversaw public health preparedness for the National Security Council in Mr. Trump’s White House and had been the acting chief scientist at the Food and Drug Administration under former President Barack Obama. “It’s important to bring discipline to the process because the resources are finite, both financial and human.”

In interviews, six company executives and academic researchers who had begun the application process with BARDA said they had not heard back from the agency, or had been told their research area was not a priority. An executive for one biotech company, who did not want to be named because he did not want to jeopardize future federal contracts, said the company had been in the final stages of negotiating a deal with the agency when it suspended applications. That partnership is now on hold. 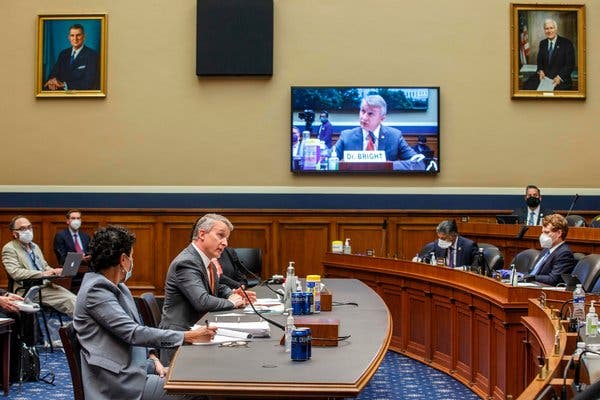 Dr. Rick Bright, former head of BARDA, told Congress last month that he had been ousted because of a dispute over an unproved coronavirus treatment pushed by President Trump. Photo Credit: Pool photo by Shawn Thew

The change in policy was posted without fanfare June 3 on a government website, and was not announced in a statement. The agency said it would no longer accept proposals involving “immunomodulators or therapeutics targeting lung repair. This area of interest is suspended until further notice.” It also said it was suspending applications for companies developing preventive treatments.

In a statement, a spokeswoman for the Department of Health and Human Services, Elleen Kane, said, “To make the most of potential partners’ time and efforts and to communicate clearly about investment areas, we are only leaving open areas of interest that are of highest priority for H.H.S. right now.”

She said the agency was setting up a clinical trial network to test multiple treatments, a better approach than “supporting expensive clinical trials for each product separately.” However, BARDA has not yet announced any such trials, and Ms. Kane said, “How such a clinical trial would be run is in early planning stages.”

The government funding is prized by companies because it helps them get through the so-called valley of death — the phase when a product has shown promise, but can fail because of a lack of investment in late-stage clinical trials and manufacturing. Many vaccines and treatments for infectious diseases like Ebola and the coronavirus don’t have a viable commercial market, so companies rely instead on federal funding.

In the case of the coronavirus, Congress has allocated more than $6.5 billion to BARDA to develop vaccines, treatments and other products to address the pandemic. The goal is to speed them through development by financing clinical trials and ramping up manufacturing at the same time, a financial risk that companies normally don’t take because they don’t know if their products will work.

Many of the companies hoping for support from BARDA were developing treatments that seek to dampen the immune system, calming the “cytokine storm” that can wreak havoc on patients with severe Covid-19.

“It seems that BARDA is shutting the door on that whole area of medicine,” said Dr. Joanne Kurtzberg, a stem cell researcher at Duke University.

She had asked the agency in early April to support a small clinical trial on the use of stem cells in patients with Covid-19 who had acute respiratory distress syndrome and said she had received only an acknowledgment that her proposal had been received.

The shift is the latest move by a low-profile federal agency that has increasingly found itself in the spotlight as the coronavirus pandemic enters its sixth month. In April, the head of BARDA, Dr. Rick Bright, announced that he had been ousted from his position in a dispute over an unproven coronavirus treatment pushed by President Trump, and said that top administration officials had repeatedly pressured him to steer millions of dollars in contracts to the clients of a well-connected consultant. 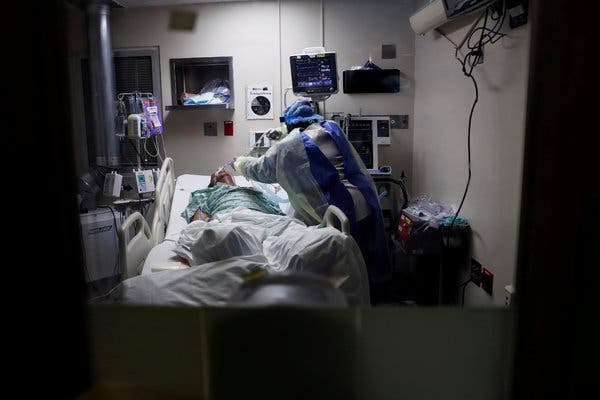 Representatives for academic researchers and smaller biotech companies contend that BARDA should disperse money to a wider variety of projects. Clinical trials for treatments, rather than vaccines, can move more quickly because the course of Covid-19 is relatively short, compared with testing a vaccine on thousands of healthy volunteers, and waiting for them to get infected. Like a vaccine, an effective drug that renders the virus less deadly could allow society to return to normal more quickly.

They also noted that many of the biggest pharmaceutical breakthroughs — like the polio vaccine or immunotherapy for cancer — originated in academic medical centers or biotech start-ups, not from large drug companies. H.H.S. said in its statement that it was working with companies of all sizes.

“We think failing to focus on lung repair is not wise,” said Janet Marchibroda, the president of the Alliance for Cell Therapy Now, a coalition of academic institutions, biotech companies and health systems that favor more research into cell therapies. “The majority of patients who are in hospitals are dying because of lung injury.”

The coronavirus outbreak has killed more than 118,000 people in the United States, and those who die often succumb to respiratory failure after the lungs become unable to provide the body with enough oxygen. In some cases, people’s immune systems go into overdrive and cause critical damage.

On Tuesday, scientists at the University of Oxford reported that a cheap, commonly used steroid, dexamethasone, reduced deaths of patients on ventilators by a third, a hopeful discovery. An experimental drug, remdesivir, has been shown to have moderate success in speeding patients’ recovery in early trials.

But others say additional treatments will be needed, because no one drug will work in all patients. BARDA has already announced deals with some companies that are testing existing drugs in patients with severe Covid-19, including $25.1 million to Genentech for its rheumatoid arthritis drug Actemra, and $16.4 million to Regeneron for its drug, Kevzara, another remedy for rheumatoid arthritis.

Researchers and companies are also testing stem cell therapies, which are also believed to dampen the immune system. One company, Mesoblast, is testing its stem cell product in patients with severe Covid-19 as part of a clinical trial supported by an arm of the National Institutes of Health.

Another company, Athersys, has also begun testing stem cells in infected patients with acute respiratory distress syndrome, a condition that can be caused by other viruses or illnesses. A previous small trial of patients with A.R.D.S. that tested Athersys’s stem cells produced positive results, and the company said in March that BARDA had designated its product to be a “highly relevant” treatment for Covid-19. A spokesman for Athersys declined to comment on the status of the application.

The chief executive of another company, CytoSorbents Corporation, said its BARDA application to finance a randomized clinical trial was now in limbo. The company makes a device, the CytoSorb, which aims to filter out the excess cytokines that are secreted by the immune system when it becomes overactive. Although the Food and Drug Administration granted emergency authorization for the device to be used in Covid-19 patients, the company’s chief executive, Dr. Phillip Chan, said the CytoSorb should undergo testing in a rigorous clinical trial.

“We are at war with Covid-19, with no cure, and a critical need to continue funding and support of the most promising therapeutic options,” he said in an email. 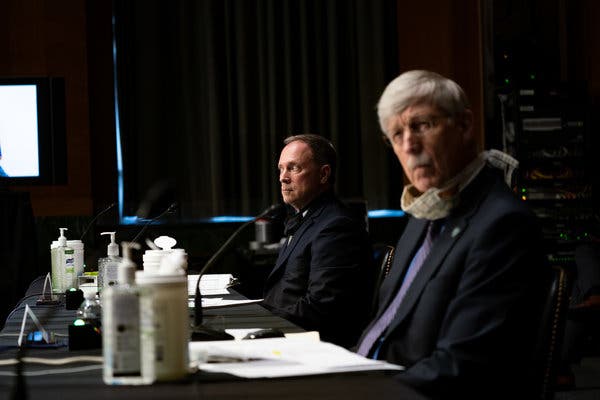 Other federal agencies are planning clinical trials that will include treatments to calm the immune system. In an interview, Dr. Francis S. Collins, the director of the National Institutes of Health, said a public-private partnership known as ACTIV — Accelerating Covid-19 Therapeutic Interventions and Vaccines — had evaluated more than 400 possible therapeutic interventions for the coronavirus and distilled them to six promising candidates for clinical trials that could be funded through President Trump’s “Operation Warp Speed” initiative.

“Among the highest priorities,” Dr. Collins said, are immune modulators and anticoagulants, used to prevent troublesome blood clots that are sometimes associated with Covid-19. The goal, he said, is to find treatments “as soon as possible for the people who are really sick.”

He said officials were in the “very advanced stages” of planning studies that would get underway in the coming weeks.

But some researchers said that while N.I.H trials were welcome, BARDA’s assistance was critical because it provided money to scale up manufacturing and help smaller companies and researchers bring their products to market.

“There’s not other government funding that really fills that gap,” said Dr. Kurtzberg, of Duke University.