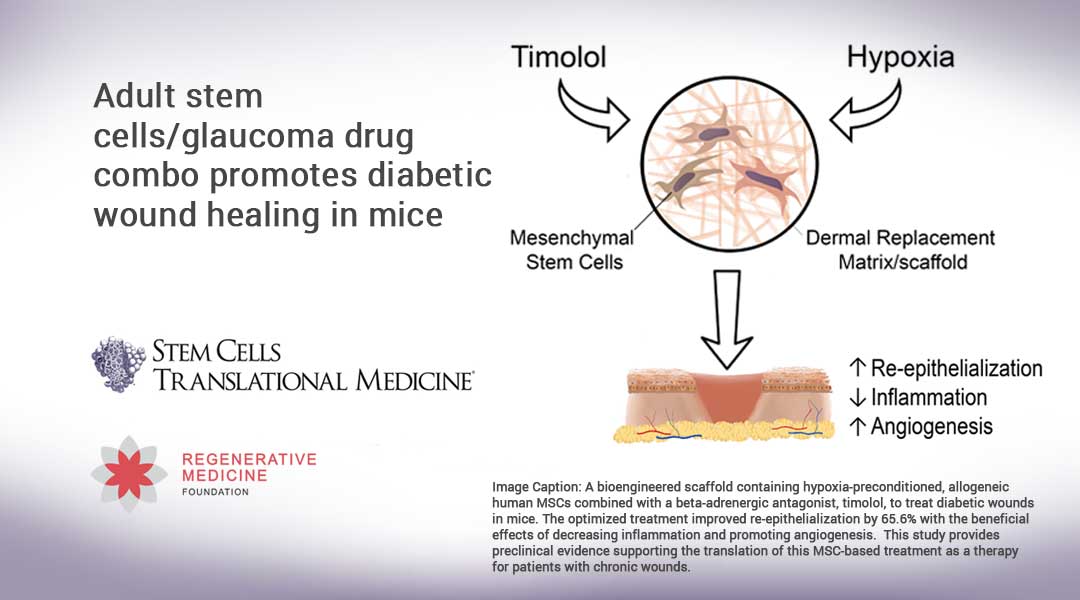 Durham, NC – A new study released today in STEM CELLS Translational Medicine shows promise of a major breakthrough in healing chronic foot ulcers resulting from diabetes. The study, by researchers at the University of California, Davis, is the first to demonstrate how a bioengineered scaffold made up of human mesenchymal stem cells (MSCs) combined with timolol — a drug commonly used to treat glaucoma — improved healing and decreased inflammation in the wounds of diabetic mice by as much as 75 percent over the control groups.

Chronic foot ulcers are some of the most dangerous and common complications of diabetes, affecting up to a quarter of the 25 million people living with diabetes in the United States alone, according to the American Diabetes Association. The association also predicts that 30 percent of these cases will eventually lead to amputation. Even more alarming is the projected five-year mortality rate of those who undergo an amputation — 48 percent, a statistic on par with colon cancer.

“U.S. healthcare expenditures for diabetes foot ulcers (DFUs) is over $43 billion a year. Yet, these expenditures for good standard of care — which includes such things as following a strict diet, off-loading pressure from the foot to allow wounds to heal, antibiotics or surgery — result in healing in only 30 percent of patients,” said Roslyn Rivkah Isseroff, M.D., professor of dermatology at UC Davis, chief of the Dermatology Service VA Northern California Healthcare System and head of the Wound Healing clinic. “Treating these patients and trying to get them to heal is what propelled me to work on this problem.” She led the study along with Jan Nolta, Ph.D., who directs the Stem Cell Program at UC Davis School of Medicine and its Institute for Regenerative Cures.

“This rather dismal cure rate has prompted vigorous research for therapeutic alternatives,” Dr. Nolta said. “Several cellular therapies for treating DFU have already been approved by the Food and Drug Administration (FDA), but the healing rates show only modest improvement when compared to the DFU standard of care. None of these products, however, are composed primarily of MSCs. MSC-based therapies may offer advantages over the currently available cellular therapies by regulating the abnormal immune and inflammatory response typical of DFU.”

Previous studies by the UC Davis team showed that 85 percent of MSCs applied to scaffolds localize to the seeding side and are retained and viable in culture for 15 days. Their work also demonstrated that hypoxia pre-treatment – that is, depriving the MSCs of oxygen – increased their survival and improved cell retention at the wound site. “Hypoxic preconditioning decreases glucose consumption by the cells, resulting in longer survival in a nutrient-deficient environment,” Dr. Nolta explained.

The idea behind adding timolol to this latest study grew out of another study by the UC Davis researchers in which they showed how wound tissue generates a stress hormone called catecholamine and that catecholamine impairs healing. (Catecholamine plays an important role in the body’s response to stress by elevating blood pressure and blood glucose levels.) Timolol is known to reverse catecholamine’s negative effects and, thus, improve healing.

To conduct their latest study, the research team seeded MSCs, collected from the bone marrow of healthy human donors, on circular matrix scaffolds. Several MSC concentrations were tested in an effort to determine optimal MSC dosing. Next, the scaffolds were incubated in timolol at 1 percent oxygen (hypoxia) in the MSC culture medium.

The scaffolds were then applied to the wounds of a group of diabetic mice. Two small, circular wounds were created opposite each other along the animal’s spine and individually splinted to keep the skin from contracting as it healed. An MSC-treated scaffold was then inserted cell-side down into the wound. The control group of mice were all treated with a matrix scaffold only (no MSCs or timolol). The idea was to see how effective the animals’ own cells were in rebuilding the damaged tissue in comparison to the wounds treated with MSC-matrix and timolol.

Additionally, several of the MSC-matrix treated wounds received a daily application of timolol (different doses were tested) to gauge how the drug affected the healing process.

Seven days later the results were analyzed. The researchers discovered that all the matrix scaffolds using the combination of MSCs with hypoxia and timolol preconditioning showed significantly improved wound epithelialization (that is, tissue repair) — by more than 70 percent — relative to the matrix-alone group. The additional timolol applications applied to the matrix/MSC combination also increased re-epithelialization, by nearly 75 percent as compared to the non-timolol treated controls.

“Overall, the combination of MSCs and timolol successfully improved wound healing and reduced inflammatory response in the mice,” Dr. Nolta said. “This suggests that this unique approach could potentially provide superior healing responses in humans with diabetic wounds.”

“For this work, scientists have combined adult stem cells with a repurposed drug that improves healing to create a novel bioengineered scaffold that could someday lead to a new treatment for chronic diabetic ulcers,” said Anthony Atala, M.D., Editor-in-Chief of STEM CELLS Translational Medicine and director of the Wake Forest Institute for Regenerative Medicine. “The outcomes from this study are promising and offer therapy not just for diabetic ulcers, but also for other types of wounds.”