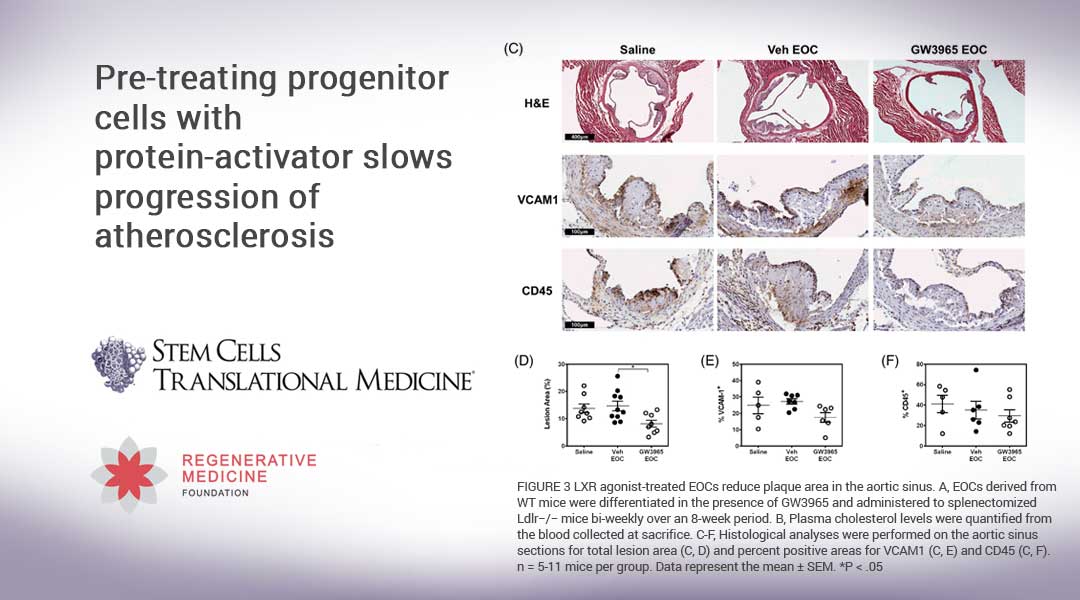 Durham, NC – A new treatment for atherosclerosis, commonly known as hardening of the arteries, may be on the horizon, according to a study released today in STEM CELLS Translational Medicine (SCTM). The study demonstrates how injecting mice with early outgrowth cells (EOCs), after first treating the cells with chemicals to activate a type of protein called liver x receptor (LXR), slows the development of this disease.

Atherosclerosis is a leading cause of heart attack, stroke and other cardiopulmonary disorders.  It results when plaque buildup in the arteries causes them to narrow and blocks blood flow. Many researchers believe this plaque begins when an artery’s inner lining, called the endothelium, is damaged.  Since EOCs are a type of endothelial progenitor cell that contributes to vascular repair, this makes them a promising candidate for treating atherosclerosis and other cardiovascular diseases, too.

This study published in SCTM was conducted as a follow-up to an earlier investigation in which these researchers showed how LXRs, which are known to regulate inflammation and cholesterol in the body, play a crucial role in preventing cholesterol-induced defects in EOCs. “This time around, we wanted to see if activating LXR in EOCs could be beneficial in treating atherosclerosis,” explained corresponding author Carolyn Cummins, Ph.D., a member of the University of Toronto’s Leslie Dan Faculty of Pharmacy.

“Other animal studies had already shown that administration of EOCs promotes plaque stabilization and decreases its formation, partially through endothelial engraftment,” she added. “However, those studies were all performed when the animals were in the later stages of atherosclerosis. We believe our current study is the first to explore EOC intervention in atherosclerosis’ earlier stages.”

The researchers began by differentiating EOCs from the bone marrow of wildtype (normal) mice and exposing the EOCs to a chemical called GW3965 hydrochloride, which is a potent activator of LXR, or a control vehicle (ethanol) for a period of seven days. They then injected each mouse with either the GW3965-treated EOCs, the conditioned media (CM) in which the EOCs had been cultivated or the control vehicle. Injections were given twice a week, over an eight-week period.

At the end of the treatments, results showed that LXR activation led to the secretion of factors that reduced binding of inflammatory cells to the endothelial cells, which in turn slowed the development of atherosclerosis, compared to the group that received the control vehicle only. This enhanced secretion occurred in both the EOC- and CM-injected animals, indicating that the secreted components alone were sufficient for the therapeutic benefit of EOCs. “Identifying the components of the secretome that mediate these positive effects of EOCs is a current area of focus and will potentially lead to new avenues to treat atherosclerosis,” Dr. Cummins commented.

This multi-institutional team led by Dr. Cummins, with clinical colleagues at the University of Ottawa Heart Institute, also confirmed that, just as with the mouse-derived EOCs, EOCs derived from the blood of human coronary artery disease patients and pre-treated with the GW3965 hydrochloride LXR agonist produced similar results in cell culture. “While LXR activation in patients can cause unwanted side effects, this type of therapy of  treating one’s own cells in culture with this drug is a way to circumvent these problems,” said first author Adil Rasheed, Ph.D.

“Further experiments are needed to examine the long-term efficacy and any potential toxicity prior to human studies; however, our findings suggest that treating patient-derived EOCs with LXR agonists before administering them to the patient could represent a novel therapy to lessen the effects of atherosclerosis and reduce plaque buildup,” Dr. Cummins concluded.

“These early pre-clinical results are certainly encouraging and demonstrate the need to further pursue this therapy that could lead to a potential treatment for vascular diseases,” said Anthony Atala, M.D., Editor-in-Chief of STEM CELLS Translational Medicine and director of the Wake Forest Institute for Regenerative Medicine. “We look forward to seeing this work continue.”