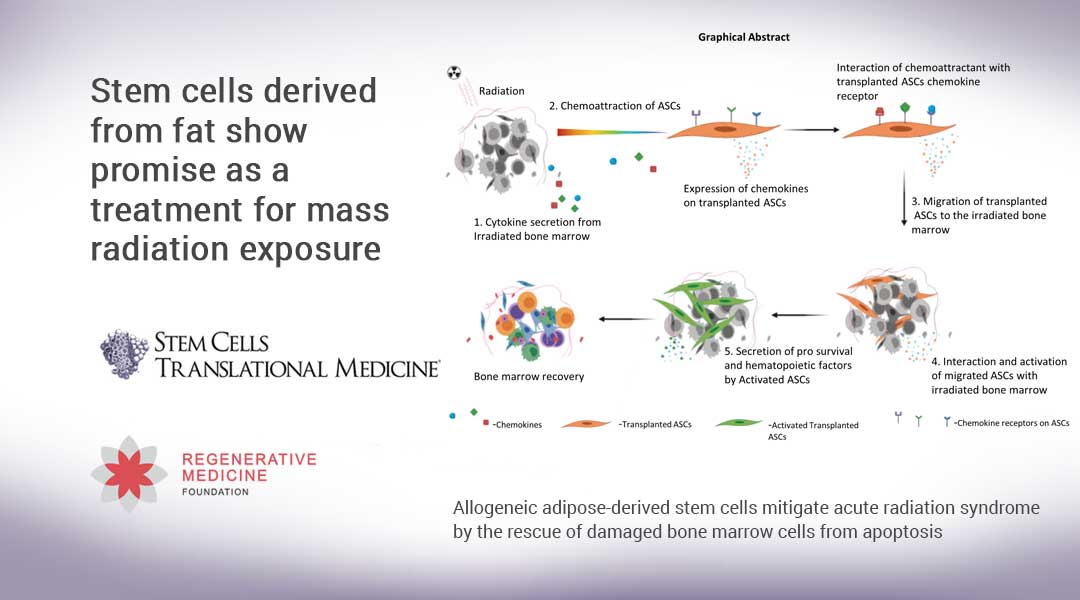 Durham, NC – Nuclear power offers an efficient, reliable way to provide energy to large populations – as long as all goes well. Accidents involving nuclear reactors such as those that took place in 1986 at Chernobyl and at Fukushima Daiichi after the March 2011 tsunami raise major concerns about what happens if the worst occurs and large numbers of people are simultaneously exposed to high levels of radiation. Currently, there are no effective, safe therapies for total body irradiation (TBI) – a condition known as acute radiation syndrome (ARS). That could change, in the future based on new research published in STEM CELLS Translational Medicine.

Researchers at the University of Pittsburgh Medical Center (UPMC) demonstrated, for the first time, how allogeneic adipose-derived stem cells (ASCs) can mitigate TBI-induced ARS. This would allow for the stockpiling of these cells to be used in case of a radioactive emergency.

“In nearly all instances of TBI exposure, the primary life-threatening damage is inflicted on the hematopoietic system, which primarily consists of the bone marrow, spleen, tonsils and lymph nodes involved in the production of blood. High doses of radiation can cause irreparable damage to the bone marrow, affecting the immune system and potentially causing inflammation and infection,” said the study’s co-author, Asim Ejaz, Ph.D., from the UPMC Department of Plastic Surgery.

A matched hematopoietic stem cell transplant is the current therapy of choice. Patients are either able to donate their own stem cells for transplantation – called an “autologous” transplant – or a donor whose stem cells are a good match is found.  The odds of finding an adequate match is low at about 30 percent and for some populations the odds are even less.

“That fact leads to the major issue with relying on this type of therapy: In a mass population exposure scenario involving several hundred to millions of individuals, hematopoietic stem cell transfusion is an impossible way forward as there is just no way to treat massive numbers of people who are exposed to radiation at the same time. And unfortunately, such a delay in treatment for a large number of individuals would most certainly lead to an increase in their mortality rate,” Dr. Ejaz said.

Several drugs are currently being looked at as potential therapies, but none provides complete protection, and all have unwanted side effects. This leaves the need for alternative therapies. Previous studies have reported that mesenchymal stem cells derived from bone marrow, placenta or Wharton’s jelly can mitigate the effects of ARS. However, low yield and difficulty in harvest and mass production of these cells for stockpiling are some of their drawbacks.

“There is one attractive cell-based candidate we’re looking at,” said J. Peter Rubin, M.D., chair of the Department of Plastic Surgery at UPMC and a co-author of the study, “and that is adipose-derived allogeneic stem cells (ASCs). These are mesenchymal stem cells derived from adipose tissue (fat), which can easily be harvested in vast quantities from donors via liposuction.

“Adipose-derived ASCs have been proven to be safe, they have self-renewal capacity and can undergo differentiation to mature cells,” he added. “They also are very easy to propagate in cell culture compared to other cell types, which means they can be stockpiled for application at mass levels in case of radiation accidents.”

The team’s study focused on how treating mice that were exposed to high levels of radiation with injections of allogeneic ASCs measured up to treating them with autologous ASCs. In particular, they wanted to see if the injections would improve the animals’ survival rates and repair damage to their hematopoietic systems.

The injections were given 24 hours after the mice were exposed to the radiation. When, 35 days later, the researchers examined the results, they found that the allogeneic ASC-treated groups performed equally to the autologous cells in improving the animals’ survival and recovery rates vs. the non-treated control group.

Added Dr. Rubin, “This suggests that allogeneic ASCs therapy may be beneficial for clinical adaptation to treat TBI-induced toxicities. Further studies will help to advocate the scale-up and adaptation of allogeneic ASCs as the radiation countermeasure.”

“The data from this pre-clinical study suggesting the ability of fat-derived stem cells as a therapy to effectively mitigate acute radiation syndrome is interesting and potentially useful,” said Anthony Atala, M.D., Editor-in-Chief of STEM CELLS Translational Medicine and Director of the Wake Forest Institute for Regenerative Medicine. “Currently, there are no effective and safe approaches to treat mass population exposure to acute radiation syndrome; we welcome future studies that will enable the clinical adaptation of this type of therapy.”

The full article, “Allogeneic adipose-derived stem cells mitigate acute radiation syndrome by the rescue of damaged bone marrow cells from apoptosis,” can be accessed at https://stemcellsjournals.onlinelibrary.wiley.com/doi/abs/10.1002/sctm.20-0455.