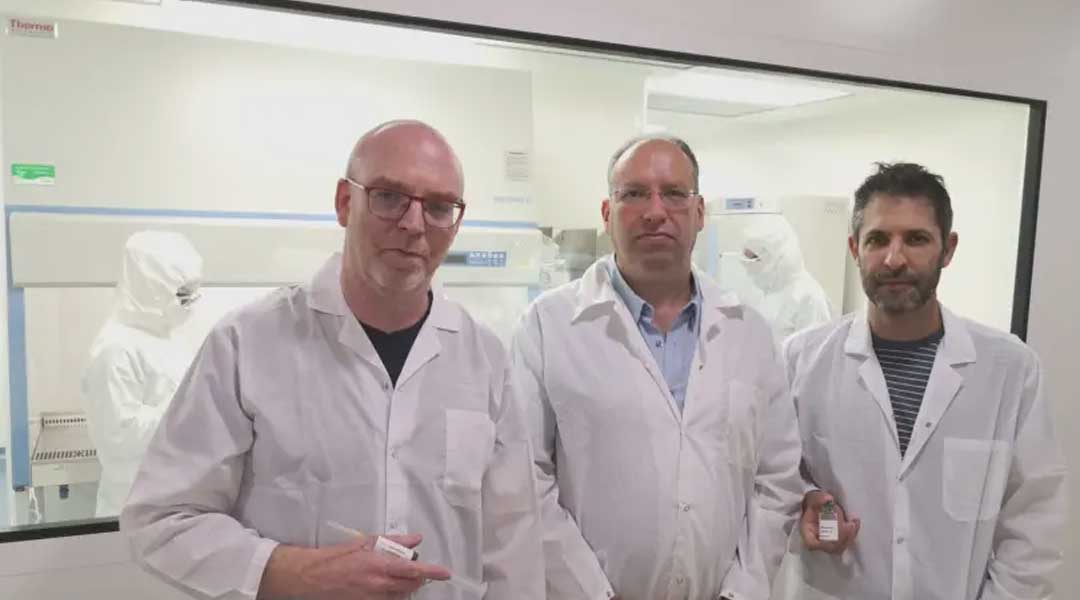 Photo Caption: MesenCure development entrepreneurs (from right): Dr. Dror Ben David, Dr. Shai Meretzki and Tomer Bronstein
From The Jerusalem Post (link to article)  – An Israeli biotechnology company has claimed a 100% success rate in the first 10 patients treated with its drug as part of an early-stage clinical trial at Rambam Health Care Campus in Haifa.
The company, Bonus BioGroup, presented the preliminary findings of its Phase I/II trial to peers at the International Society for Cell & Gene Therapy conference in New Orleans last week and shared the results in a statement released to the Tel Aviv Stock Exchange.

The Jerusalem Post, which first wrote about the treatment in May 2020, reviewed the PowerPoint presented at the conference and the five-page letter sent to the exchange. The company’s CEO and director, Dr. Shai Meretzki, told the Post that the team is now working on publishing its results in a peer-reviewed journal.

Bonus’s MesenCure, which consists of activated Mesenchymal Stromal Cells (MSCs) that are isolated from the adipose tissue of healthy donors, was found to reduce inflammation and alleviate respiratory and other symptoms in patients suffering from life-threatening respiratory distress brought on by COVID-19.
“So far, the results of the treatment with the drug MesenCure are extremely impressive and an improvement over the results of other treatments,” said Dr. Shadi Hamoud, principal investigator in the clinical trial and deputy director of the Department of Internal Medicine E at Rambam.
He said the results were so promising that the hospital was already examining use of the treatment for other indications.
Bonus reported on 10 COVID patients between the ages of 45 to 75, all with severe symptoms. Ninety percent of them also had comorbidities.
The data showed a 40% decrease in lung inflammation from treatment – from 55% to 15%, as seen in chest X-rays, in the first five days after treatment. One month later, lung inflammation reached 1%.
Additionally, patients showed significantly improved respiratory function, with blood oxygen saturation increasing to 95% and lung functioning returning to almost entirely normal levels after only one month.
Meretzki shared a laboratory image of a healthy lung, a sick lung and lung treated with MesenCure. “The treated lung looks almost identical to the normal, healthy lung – complete healing, complete prevention of damage to the lung,” Meretzki said.
Most strikingly, patients were discharged from the hospital after a median duration of only one day following the treatment.
And there were no adverse effects associated with MesenCure, the company reported.
Meretzki said the trial followed patients for 30 days post administration of the treatment. All but one had survived. The patient who died did not pass away from COVID-19 but a severe preexisting condition.
Many COVID-19 patients die because of an increase in the production of inflammatory molecules called cytokine, rather than the virus itself, Meretzki explained. When the immune system secretes too many cytokines, a so-called “cytokine storm” can erupt. Such an excessive immune response ravages healthy lung tissue, leading to acute respiratory distress syndrome or failure, and eventually death.
Bonus was founded in 2008. It has been working with MSCs for a decade from its Haifa headquarters, where it developed its core product, a tissue-engineered bone graft that is also based on MSCs.
Meretzki said that MSCs are cells that are “found in every one of us; they are responsible for damage control and a variety of day-to-day activities.”
When the coronavirus outbreak started in early 2020, Bonus started investigating the potential of MSCs to possibly reduce the cytokine storm in COVID-19 patients.
The Phase II trial is slated to continue at Rambam and include another 50 patients. However, because of the low-level of infection in Israel, Bonus has applied for approval to carry out the trial in Europe as well, Meretzki said.
He told the Post that the Phase II trial should be completed quickly once the remaining patients are fully enrolled.