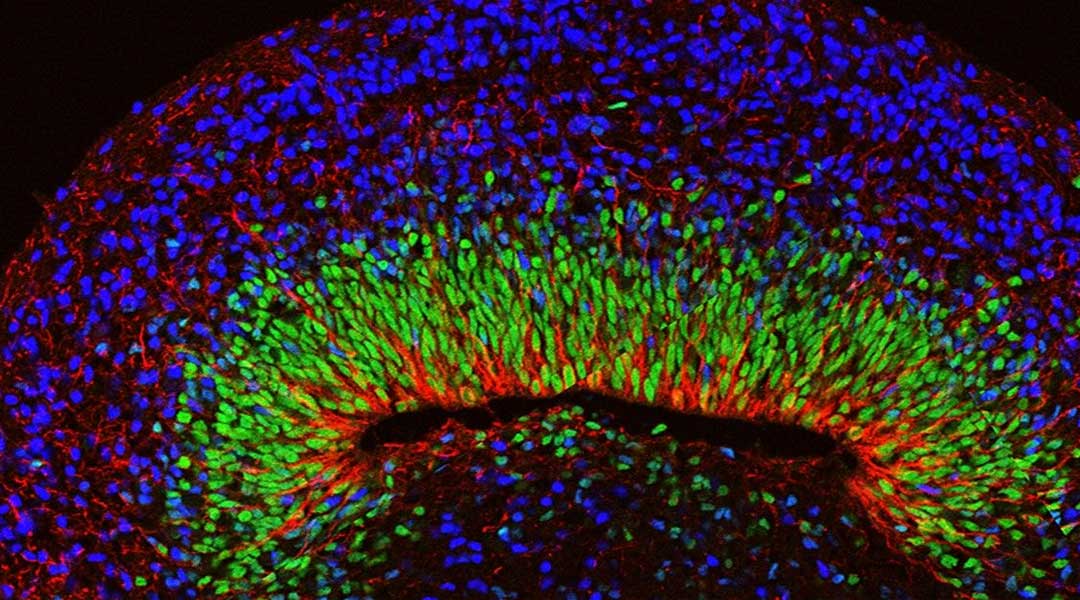 Then, while studying organoids grown from stem cells derived from patients with the neurological disorder Rett syndrome, the scientists were able to observe patterns of electrical activity resembling seizures, a hallmark of the condition.

The study, published today in the journal Nature Neuroscience, broadens the list of brain conditions that can be studied in organoids and further illustrates the value of these human cell–based models in investigating the underlying causes of diseases and testing potential therapies.

“This work demonstrates that we can make organoids that resemble real human brain tissue and can be used to accurately replicate certain features of human brain function and disease,” said Bennett Novitch, a member of the Broad Stem Cell Research Center and senior author of the study.

Over the past decade, researchers have discovered how to take cells from a person’s body, such as skin or blood cells, coax them in the lab to become induced pluripotent stem cells, or iPS cells, and then direct those cells to form any type of cell found in the body — including neurons. Scientists now can even encourage iPS cells to aggregate into three-dimensional forms, creating organoids that look more like miniature human organs than cells in a flat dish.

That advance has enabled scientists to study how one person’s cells might be different than the norm, and to carry out experiments that aren’t possible in living humans — manipulating the genetics of kidney cells, or using lung organoids to study how COVID-19 infects and damages the lungs, for instance.

When it comes to the human brain, however, creating an organoid that mimics the organ’s structural complexity is particularly challenging. Getting the cells to organize like they would in a human brain is just part of the battle.

The cells also must connect with one another and function like neurons would in a human brain. Healthy human brain cells not only send electrical signals throughout the brain in response to stimuli, but also have coordinated waves of activity called neural oscillations or brainwaves. Distinct patterns of brainwaves are associated with specific activities — learning or sleeping, for example — and abnormalities in these patterns can be an indication of disease.

“With many neurological diseases, you can have terrible symptoms but the brain physically looks fine,” said Dr. Ranmal Samarasinghe, a member of the Broad Stem Cell Research Center and first author of the paper. “So to be able to seek answers to questions about these diseases, it’s very important that with organoids we can model not just the structure of the brain but the function as well.”

After producing a batch of brain organoids derived from the skin cells of healthy people, Novitch, Samarasinghe and colleagues at the UCLA Intellectual and Developmental Disabilities Research Center used two different approaches to study the patterns of electrical activity inside them — one involved inserting a probe into each organoid to measure brain activity, the other watching the brain cells in action under a microscope.

Some of the information they gathered was akin to the data scientists would normally find in brain scans called electroencephalograms, or EEGs. The analysis showed multiple kinds of neural oscillations.

“I hadn’t anticipated the range of oscillation patterns we would see,” said Novitch, who is also UCLA’s Ethel Scheibel Professor of Neuroscience. “By learning how to control which oscillation patterns an organoid exhibits, we may be able to eventually model different brain states.”

Next, the team developed brain organoids using cells from people with Rett syndrome, a genetic disorder associated with learning delays, repetitive movements and seizures. While the organoids appeared normal in structure and organization, their neural oscillations were abnormal: They lacked the variety of oscillations demonstrated in the non-Rett organoids. Instead, the Rett organoids had fast, disorganized activity like what clinicians see in EEGs of people with Rett syndrome and related disorders.

The use of organoids to study brain disorders will remain limited because organoids don’t replicate every aspect of a human brain — they lack blood vessels, for instance — and they resemble brains in early development rather than adult brains. But the UCLA study suggests that they could nevertheless be used to test a wide range of brain functions, disorders and drugs that couldn’t be studied with brain cells in a Petri dish.

“This is one of the first tangible examples of drug testing in action in a brain organoid,” said Samarasinghe, who is also an assistant professor of neurology. “We hope it serves as a stepping stone toward a better understanding of human brain biology and brain disease.”

The research was supported by the National Institutes of Health, the California Institute for Regenerative Medicine, the Simons Foundation Autism Research Initiative, the American Epilepsy Society, the Ablon Scholars Program, the Paul G. Allen Family Foundation Frontiers Group, the March of Dimes Foundation and the Broad Stem Cell Research Center, including support from the Steffy Family Trust and The Rose Hills Foundation Innovator Grant.

The potential therapeutic strategy described in the study is covered by a patent application filed by the UCLA Technology Development Group on behalf of the Regents of the University of California with Samarasinghe, Novitch and William Lowry listed as co-inventors. The treatment was used in preclinical tests only and has not been tested in humans or approved by the FDA as safe and effective for use in humans.