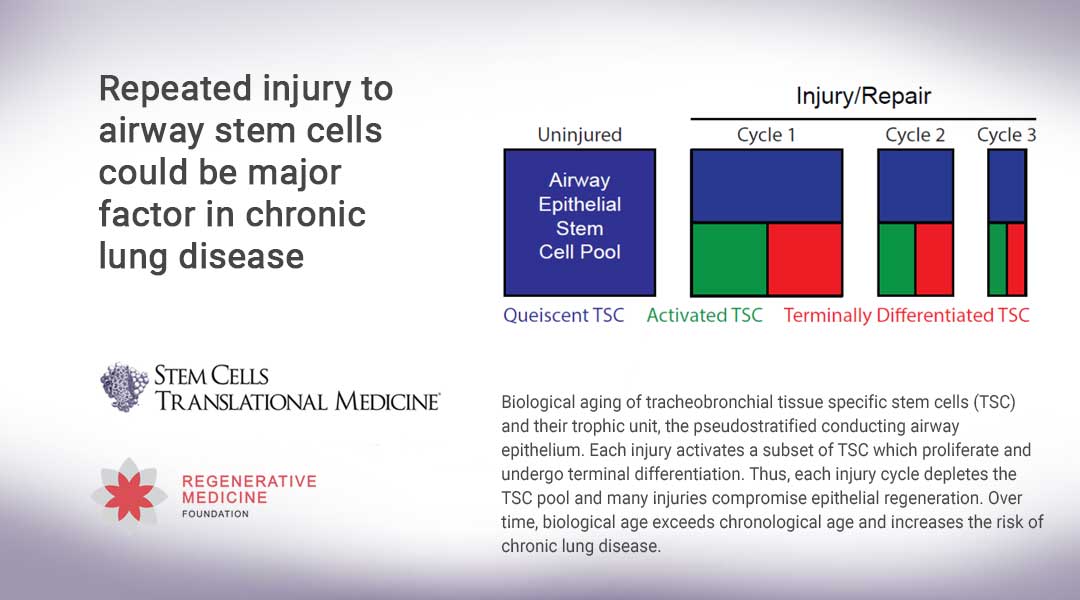 Durham, NC – Are prematurely aged or overworked stem cells a significant factor in chronic lung disease? Findings of a study just released in STEM CELLS Translational Medicine (SCTM) say this is likely so.

The study determined that repeated injury to the epithelial tissue of the airways causes “biological aging” of the stem cells located there. “This premature aging of the tracheobronchial stem cells (TSCs) in turn may contribute to chronic lung disease,” explained Susan D. Reynolds, Ph.D., of Nationwide Children’s Hospital in Columbus, Ohio, and co-lead investigator of the new study along with Moumita Ghosh, Ph.D., University of Colorado School of Medicine, Anschutz Medical Campus.

Epithelial tissues are found throughout the body. Their functions include protection, secretion, absorption, excretion, filtration, diffusion and sensory reception. Previous studies have indicated that the ability of epithelial to self-renew and differentiate declines over time, and that these changes decrease regenerative capacity. This loss of function may cause the tissue-specific stem cell and its home tissue to be biologically older than its chronological age. (Chronological age is the number of years since birth, while biological age accounts for external factors that modify function.)

Previous studies also have demonstrated that the biological age of lung cells is greater than their chronological age in at least two chronic lung diseases, idiopathic pulmonary fibrosis (IPF) and chronic obstructive pulmonary disease (COPD). “These works identified accelerated aging as a novel pulmonary disease process; however, using this information to develop new therapies to treat patients requires a better understanding of chronological aging and the factors that increase biological age,” Dr. Reynolds said. That was a goal of this latest work.

Biological aging is associated with telomere shortening. Telomeres, found at the ends of chromosomes, prevent loss of genetic information during DNA replication. They shorten as the cells divide in response to normal cell turnover or injury-induced cell death.

In an earlier study, Drs. Reynolds, Ghosh and their team challenged the idea that TSC maintains its function throughout an individual’s life. Instead, they suggested that repeated proliferation of TSCs caused them to biologically age and lose functional capacity – a theory backed up by their study’s findings.

“In our latest study,” Dr. Ghosh said, “we refined this concept by showing that injury activated just a fraction of the mouse TSC population and suggested that this process conserved mitotic potential of the inactive subpopulation.” (Mitosis is the process by which cells divide and reproduce.)

After exposing mice to naphthalene – an aromatic hydrocarbon commonly used in moth balls and manufacturing – they used chromatin labeling and flow cytometry to determine that this injury had activated a subset of TSC, which continued to proliferate after the epithelium was repaired. A second naphthalene exposure accelerated the TSC proliferation.

When the researchers looked at why this was happening, they found that a new cohort of TSCs had been activated and were responsible for the epithelial regeneration. Thus, they concluded that partial activation of the TSC pool conserved the mitotic potential of the remaining TSC.

Their analysis of the mouse TSC also demonstrated that the majority of activated TSC (96 percent) did not self-renew, but instead produced unipotential basal cells – the final TSC descendant – and, thus, were lost from the TSC pool.

In summary, Dr. Ghosh noted, “These mouse studies indicate that injury causes selective activation of the TSC pool and that activated TSCs are predisposed to further proliferation. It also demonstrated that the activated state of the TSCs leads to terminal differentiation.”

Next, the team analyzed telomere length in human TSCs using bronchial and nasal cells donated by people with a rare premature aging disease called Dyskeratosis Congenita (DC), caused by mutations in the telomeres. As a control, they also studied TSCs donated by healthy people without the disorder.

Just as with the mice, it appeared that repeated proliferation in humans led to terminal TSC differentiation and a depleted TSC pool, too. “TSC frequency was significantly decreased in DC patients relative to the non-DC controls, long-lived TSC were not detected in DC patients and TSC from DC patients had short telomeres,” Dr. Reynolds added.

“Collectively, these data from the mouse and human TSC studies indicate that many injury/repair cycles decrease the reparative potential of the epithelium and that the magnitude of this decrease is dependent on the number of TSCs activated by each injury. These studies identify biological aging of TSC as a process that could drive the development of chronic lung disease,” the researchers concluded.

“This latest research adds more scientific knowledge to what we know about how chronic lung disease develops,” said Anthony Atala, M.D., Editor-in-Chief of STEM CELLS Translational Medicine and Director of the Wake Forest Institute for Regenerative Medicine. “A better understanding of biological aging of stem cells could someday lead to new treatments and therapies.”